As a Muslim, I feel it is my duty to make the community understand us because of so much happening around the world right now. We are being punished because of the behaviour of some minor groups doing the wrong thing. I am knocking on every door to make Australia a better place for our next generation. If you want to open your home, anywhere in Australia, please call us at Mahboba’s Promise.

Mahboba travelled to the Bega Valley for a few days last week to visit some friends of Mahboba’s Promise.

About fifteen years ago, Carole Broadhead, who lives in Bermagui, had established a small international support and funding group called ‘Loomgrowers’ with a group of like-minded local women. They went on to become Friends of Mahboba’s Promise-Bega Valley and have been supporting us since then. Over that time, about eight beautiful “girls” (as I call them) have raised around $100, 000 for permaculture, solar power, cows and calves. Usually they choose their own project. We spend the money and give them a report.

I go down to see them once a year. They take me all over the area: Moruya, Bermagui, Cobargo, Akolele etc. They open their homes to me and the community generally, and they ask me all kinds of questions about Islam, why I wear hijab, what the Koran says about non Muslims etc. Amidst all the confusion that they get from the media, I answer their questions.

Last year, my son Sourosh and his friend Mahdi went down there because I was in Afghanistan, and the effect of them was much greater than I could have, because the community said Sourosh was a young man with polite understanding, patience and explained everything they asked about religion or any other topic. He answered them beautifully. So we, mother and son, have tied ourselves to each member of this community in a kind of love which has been created between a Muslim family and this beautiful community.

Now I want to talk about Bill and Elizabeth, who live in Akolele. Bill has had a distinguished career in many areas of musical activity and was until 1998, Professor and Director of Music at the Australian National University. To my understanding, when I met Bill I was so emotional to see a man in his seventies playing piano for children in Afghanistan. How nice of him to open his house, bring the community together and provide delicious food with some assistance. He played for hours for the children of Afghanistan. All the concerts he has put on over the years have been numbered from Mahboba’s Promise 1. This year’s recital was Mahboba’s Promise 9, and it was exactly the same program as Mahboba’s Promise 1. It is amazing to me that this community has a concert and calls it Mahboba. They also make jam, skincare products and organic sauces which they sell to raise funds for us. 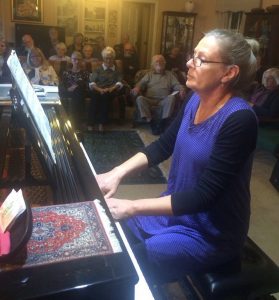 My feeling now is that I have met a community which is part of my family. I went and stayed with Carole for many years and then I stayed with Betty and they all have their houses open for me and they have become like a family to me. I call Bill my Aussie Dad and I feel I have found sisters, mothers and fathers there. This year when I saw Bill I see he has grown older and he is pushing his fingers to play the piano – he is really working hard. All I can say to Bill is by pushing your fingers on the piano, you are tackling poverty in Afghanistan. We raised $6000 there in a few days. Next year will be the last year of recitals. For ten years he has played the piano; he has found a daughter, an Afghan Muslim daughter, and I have found an Aussie Mum and Dad. I burst into tears when I thanked Bill because he is too good to be true. He has the highest level of humanity. He has an MBE and an OAM and he really deserves them very much. Really, there are no words I can use to describe how I feel about this family and this village. Not in a million years can I write my true feelings. All I can say is “Thank You”.