Mahboba’s Promise is an Australian non-profit organisation dedicated to helping disadvantaged women and children in Afghanistan.

Mahboba’s Promise was founded by Mahboba Rawi, an Afghan refugee and now an Australian citizen, who has experienced first-hand the effects of a country torn apart by years of war and civil unrest. With Mahboba’s intimate knowledge of Afghanistan, Mahboba’s Promise was able to respond effectively and flexibly, to directly meet the needs of the country’s orphans and widows. Since then, Mahboba’s Promise has established schools, shelters and health clinics across Afghanistan and provided numerous sponsorships to widows and orphans in need.

Born in Afghanistan, Mahboba was forced to flee as a teenager due to her activism against the Soviet occupation. She lived in a refugee camp in Pakistan for two years before marrying and moving to Australia. After her son’s death in 1992, she decided to take action to protect and advocate for children in Afghanistan. This lead to the creation of Mahboba’s Promise. She has plight of women, widows, orphans and girls in Afghanistan, empowering them by providing a home, education and healthcare at grass roots level.

Mahboba is a humble quiet woman who has got things done. She has an intimate and insightful perspective into the Afghanistan situation and deep knowledge of the culture and the social dimensions of humanitarian aid in the country. She has direct access to stories on the ground and her insights and intel provide a personal account of what is really like for women and children to live under Taliban rule.

Nawid (Sourosh) Cina is a human rights advocate with a dedicated commitment to international development and gender equality.

Nawid completed his Bachelor of Laws & Bachelor of Arts in International Studies from UTS and undertook his Practical Legal Training at the Refugee Advice & Casework Service. He currently works at the Champions of Change Coalition as a Program Associate, where he contributes to work that involves those in positions of power working towards gender equality reform. Previously, Nawid led the organisation through COVID-19 whilst securing a 15% increase in overall donations, in addition to leading major operational changes domestically and in projects on the ground in Afghanistan.

Nawid pivoted full time back to Mahboba’s Promise in a General Manager capacity following the post-withdrawal crisis. He guided the charity’s response on the ground, especially in relation to continued work for displaced peoples, and led operations locally. In this time, Mahboba’s Promise saw significant growth and public exposure, within 7 weeks. Nawid also led evacuation efforts in Afghanistan, resulting in 17 orphans and staff evacuated to Australia in a land journey. He is currently heading Strategic Relations at the charity and continues to advocate for more visas.

Nawid has been an active youth mentor for boys from disadvantaged communities in Sydney’s South-West and until recently, lead a team to organise the biennial National Muslim Youth Summit, bringing together young Australian Muslims to discuss key social issues. He is the Co-Founder of a new student leadership program called ‘Future Leaders for Gender Equality’.

To provide effective overseas development aid to disadvantaged Afghan women, widows, children and orphans. We will achieve this through sustainable development programs such as the establishment of schools, health clinics and community facilities destined to be operated by local authorities and communities.

Be equitable and non-discriminative

Restore faith in the future of Afghanistan

Effective consultation with all stakeholders 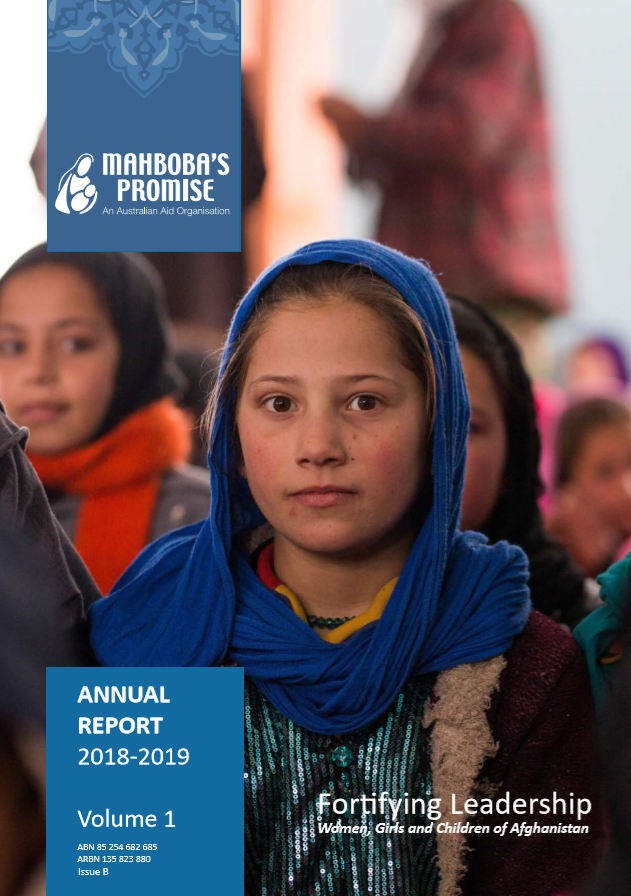 Mahboba’s Promise’s ongoing projects have provided education and homes for children, vocational skills and training for women, and support and health care access for the wider community; and over 20 years later, still stands as a respected and effective organisation bringing valuable, sustainable change to the people of war-torn Afghanistan.

The Association has an authority to fundraise issued by the Office of Charities, Department of Gaming and Racing under the Charitable Fundraising Act 1991.

Our Annual Report for 2018-2019 is now available. Over the year we have focused on creating self-sustaining projects that guarantee long term benefits to the communities we work with. With improved efficiency in our operations and our dedicated staff, volunteers and management committee. We are looking forward to what Mahboba’s Promise can achieve in the next year to come!

Monetary donations of $2 or more to Mahboba’s Promise can now be directly claimed as tax deductions with the Australian Taxation Office. On receipt of your donation, we will issue you with a tax receipt for this purpose. Monetary donations to our appeals and for widow or child sponsorships are also tax deductible.

For advice on the tax deductible status of other kinds of donation, including donated goods, please consult your accountant or the ATO website at: www.ato.gov.au

The Association’s financial statements are audited annually. Our auditor is Robert Mayberry of Nexia Court & Co.

Stay updated on our work.