In 2006, Sanaz Fotouhi, a young woman in her twenties, travels to Afghanistan with filmmaker Amin Palangi to make a film. Seven years and four trips later their documentary Love Marriage in Kabul, which features the extraordinary work of Mahboba Rawi of Mahboba’s Promise, wins awards and the hearts of audiences in Australia and around the world.
Love Marriage in Kabul: A Memoir is the behind-the-scenes account of the hardships and heartaches, tears and joys of the seemingly impossible project of making a film in Afghanistan. It is the story of a young woman’s determination to confront her fears to provide an insight into the hidden world of Afghanistan’s widows and orphans. It is also an insight into the world of Mahboba’s Promise. With rare compassion and lucidity, Sanaz Fotouhi chronicles her inner struggles and external events and leads us to interrogate our own notion of humanity.

Winner of the Peter Blazey Fellowship in 2019, the book makes a great read and gift for Christmas. Complement this with the gift of Love Marriage in Kabul the film. 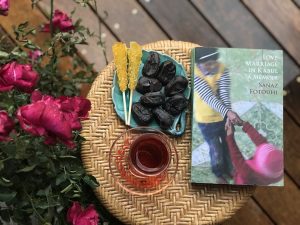 Buy your own copy of the book from our online store.

Mahboba Rawi, a strong-willed Afghan-Australian woman, and the founder of Mahboba’s Promise, has dedicated her life to helping orphans, widows and schooling girls in Afghanistan. She is the mother figure for thousands of orphans she has rescued.

Abdul, one of these orphans, is in love with Fatemeh, the girl next door. The two have been exchanging romantic letters for over a year and hope to marry one day. But Fatemeh’s father has other plans – he has decided to marry her off to anyone who can offer a large sum of money as her dowry. Devastated, Abdul is hoping when Mahboba arrives for her yearly trip to Kabul, that she will help him again. When Mahboba hears the story, she is very concerned about Abdul, and Fatemeh’s possible fate in a forced marriage, She is determined to make the marriage happen between Abdul and Fatemah.

However, Fatemeh’s father makes demands beyond anyone’s expectations. He won’t let the marriage happen unless Mahboba pays him $10,000 or finds a wife for his eldest son to replace Fatemeh’s role in the household. With nothing to Abdul’s name, the fate of the couple depends entirely on Mahboba’s ability to meet or negotiate the father’s terms. But she only has one month and limited resources.

Buy your own copy of the film from our online store.